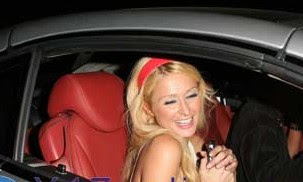 RETURN To the scene...
Here was the scene just an hour after being cuffed in the back of a police cruiser. Today, Paris' mood was more solomn, suggesting she knew the weight of what was about to happen.
The judgement stems from a second incident on February 27 when officers charged her with violating her probation after being pulled over around 11 pm for speeding down Sunset Blvd. without her lights on. Paris claimed she didn't know her license was suspended, meanwhile she had signed a document on January 15, after being pulled over, acknowledging that she was aware her license was suspended and that she was not allowed to drive.

Paris is to report to a woman's jail in Lynwood, CA .

And... Paris Hilton locked Up

Hand in hand with her father ,...
VIDEO CLIP LATEST CHANCE BEFORE THE COURT.