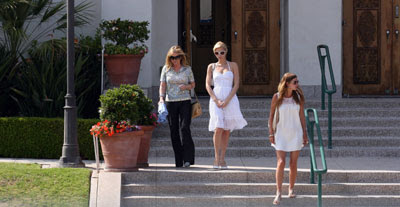 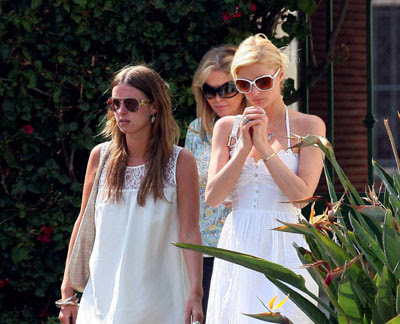 Before She's goes to the church for...

Paris Hilton will serve about half of her 45-day jail sentence and will be separated from the general inmate population, authorities said Wednesday.
The hotel heiress will spend about 23 days in a "special needs housing unit" at the Century Regional Detention Center in suburban Lynwood, Los Angeles County sheriff's spokesman Steve Whitmore said.
Her sentence was shortened after jail officials gave her credit for good behavior, Whitmore said. Officials considered several factors in calculating the credit, including that she appeared for her latest court date, he said.
Hilton will stay in a unit that contains 12 two-person cells reserved for police officers, public officials, celebrities and other high-profile inmates, he said.
Like everyone else in the 2,200-inmate facility, Hilton will get at least an hour outside her cell each day to shower, watch television, participate in outdoor recreation or talk on the telephone, he said.
The 26-year-old socialite was sentenced to jail this month for violating the terms of her probation in an alcohol-related reckless driving case. A judge ordered her to report to jail by June 5.
A call to her lawyer, DUI specialist Richard Hutton, was not immediately returned. Her publicist, Elliot Mintz, declined to comment.

Paris talk
Paris answered an photographer today when asked about her feelings regarding the verdict -- "I told the truth yesterday. I feel that I was treated unfairly and that the sentence is both cruel and unwarranted ..."
She met up with her parents for lunch, presumably to discuss her legal options and whether to proceed with an appeal against the 45-day jail sentence she received for driving on a suspended license.
Paris met with her parents Rick and Kathy at the Italian eatery Prego in Beverly Hills and then she and her mother went down the block to Francis Orr stationers so Paris could pick up some cards, gift bags and gift wrap. Needless to say, they were surrounded by paparazzi.
Check out the scene ...

With only a few weeks remaining before she faces her looming stint in the joint, Paris Hilton spent yesterday indulging herself with some fake tanning at Sunset Tan and some real dough-spending at Sugar on La Brea. But the day wasn't all about Paris - as you can see in our video below, she set aside a little quality time for her favorite bitches!
It's too bad she wouldn't give us a comment - after all, yesterday the sheriff cut her sentence to 23 days (nearly a fifty percent reduction) and granted her permission to serve it in a special cell separated from the general population of the Lynwood Detention Center. We'd have loved to have heard her reaction to that news - even if it would have just been a good ol' "That's hot"!