Angelina Jolie and Brad Pitt as "still loving you". 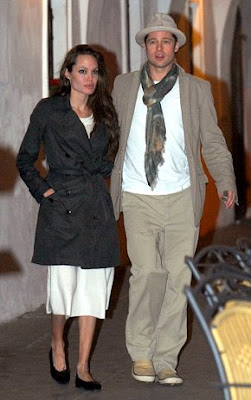 STILL DATING WITH BRANGELINA.
Days after performing a steamy lap dance for, actor Olivier Martinez Angelina Jolie was photographed with her lover Brad Pitt in the Czech Republic.

Angelina reportedly performed a raunchy routine for Olivier at a small VIP after-party at Gin Lane restaurant..
A source told Us Weekly magazine: "Angelina started dancing and waving her
arms after being cheered on by a group of drummers.
"She turned to Olivier on the banquette and was shaking it in front of him.
She was giving him a lap dance.
"She was looking over her shoulder, tossing a glance his way.
"It was very, very flirty."
The couple were romantically linked when they starred in 'Taking Lives' in
2004, while Olivier was still dating Australian singer Kylie Minogue.

Both Angelina and Olivier denied they were romantically involved.
Jolie and Brad Pitt arrived at the Prague airport on Tuesday night with their four children. After having their passports checked onboard, the gang, joined by several bodyguards, climbed into a silver Mercedes and headed off to their rented home. Pitt, wearing a cream fedora, sat in the passenger seat with the window down reports US Magazine.
The following afternoon, Jolie arrived at the studio where she will spend the next month shooting her latest action picture, Wanted, in a blacked-out Mercedes and spent hours doing costume fittings and make-up previews.
A source tells Usmagazine.com that Jolie specifically asked Wanted producers that she only films during the day, so that she can spend the evenings with Pitt and the kids.
Says the source: "Angelina put in a request with us to only work on the movie during the day. She stressed how important it was for her to be with Brad and the kids in the evenings as she didn't want their days to be messed up."
"Naturally, her demand was met and she is now only scheduled to film during the day."

Meanwhile, Brad Pitt is a baby in his latest film. 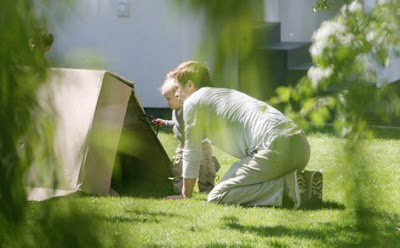 The actor's face will be superimposed onto the body of a baby for new movie
'The Curious Case of Benjamin Button', which is about a man who is born
70-years-old and ages in reverse.
Director David Fincher told Britain's The Times newspaper: "In the past you
may have had different actors playing him at different stages of his life,
but here I can use Brad Pitt throughout, just putting his head on different
people's bodies.
"I really think that it will work. At least I hope it does, if not, it's
going to look bloody awful!"
But the filmmaker is confident movie goers will be convinced by the computer
wizardry used to make Brad a baby.
Fincher added: "I don't think an audience is going to be able to tell the
difference between a film shot digitally or on film. "Technology moves on,
and it's going to be vital for the film."
The movie, based on the short story by F. Scott Fitzgerald, also stars Cate
Blanchett, Tilda Swinton and Brad's daughter Shiloh.
Shiloh - who turns one on May 27 and is Brad's child with partner Angelina
Jolie - has a cameo role playing Cate as a baby in the movie.
A source recently revealed: "Brad and Shiloh saved the day when twin sisters
hired to take turns playing Cate Blanchett's character as a baby wouldn't
settle down.
"Everyone waited in vain while the babies were fed, changed and hugged - but
nothing worked to calm them on the set in New Orleans.
"Then quick-thinking Brad realized his daughter's happy and mellow
disposition made her a quick fix for the role."
Shiloh, who had been playing at the on set day care centre, was swiftly put
in costume.
The source added: "She's a natural. Shiloh did her scenes perfectly and was
giggling and happy throughout her big day." 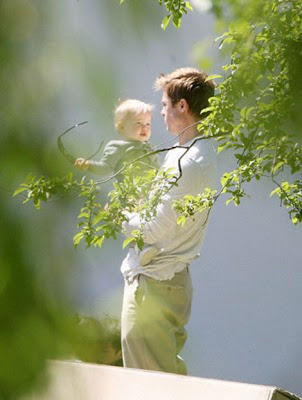 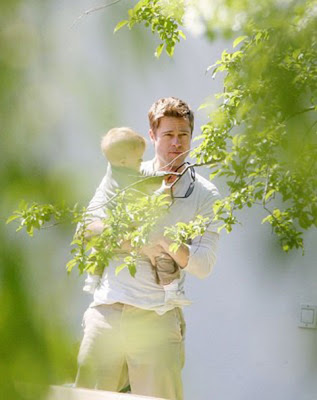